Get this asset pack and 3 more for $25.17 USD
The Japan Bundle: City Starters
View bundle
Buy Now$5.99 USD or more

This large assortment of miscellaneous Japanese street objects was created to make your game and environments feel more 'lived in'! This pack was made to work well with my Japan Bundle packs but it can also work as a stand-alone pack for your environments.

- A mix of neon and non-neon bar signs

- A wide range of sprites from a Takoyaki stand to a Shika Deer!

The pack was part of a Patron Mini Mashup where patrons participated in requesting sprites to be included. The Readme includes the names of which patron requested which sprite.

Base tilesets used in the screenshots:

You can use the Licensed Asset to create Derivative Works; and

(b) used for the Purchaser’s own personal use; and/or

A Licence does not allow the Purchaser to:

(a1) Use the Licensed Asset or Derivative Works in a logo, trademark or service mark;

(b1) Use, sell, share, transfer, give away, sublicense or redistribute the Licensed Asset or Derivate Works other than as part of the relevant Media Product; or

(c1) Allow the user of the Media Product to extract the Licensed Asset or Derivative Works and use them outside of the relevant Media Product.

Get this asset pack and 3 more for $25.17 USD
The Japan Bundle: City Starters
View bundle
Buy Now$5.99 USD or more

In order to download this asset pack you must purchase it at or above the minimum price of $5.99 USD. You will get access to the following files: 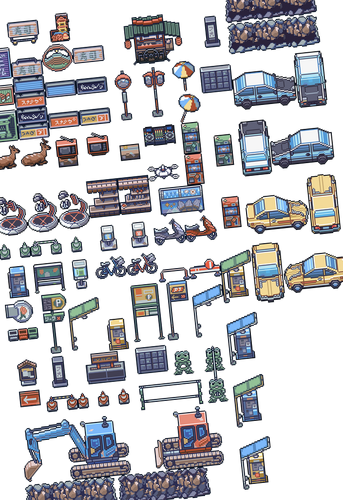